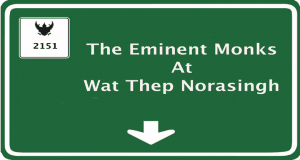 In Thailand, there are two main subsets of monkhood; Mahanikai

and Thammayuttiganikai. Wat Thep NoraSingh belongs to the Mahanikai group. The temple sits on a 9.8-acre plot of land, near the Barn Koak Taa Singhreservoir, a popular tourist attraction. A rich and beautiful forest surrounds the reservoir, brimming with a wealth of exotic plants and animals.

The temple was founded in B.E. 2530 by Luang Pu Puang Thammasaro,

who is the Phrathan Song (President Monk). Luang Phor Rom Wiriyathammo has been the Zhao Awat since B.E. 2535.

was born on 10th May B.E. 2477, in Barn Koak Taa Singh, Tambon Sawai Jik, Ampur Muang, Changwat Buriram. His surname was GreongRam. His father was named Nai Mun, mother was named Nang Boon. He was born into a family of farmers. His parents eked out a living as handymen-for-hire. His mother passed away when he was very young. He completed Primary 4 education at the school housed in Wat Barn Sawai Jik.

(a local Surin dialect). He had rebellious teenhood, a cause of constant concern for his father, who worried about his son being influenced by the wrong company. As a result of this, his father brought him to Wat Sanuan Nai (at Tambon Sawai Jik)  to become a Sammanen, and understudy with the Zhao Awat, hoping to set him on the right path. Young Sammanen Puang was very committed to his Buddhist studies (Phra Pariyattitam) and passed his NakTam ChanToh examinations a mere 3 Pansa.

Sammanen Puang left the sangha after a few years to take care of his father, who had fallen gravely ill. When he was 20 years old, Nai Puang

returned to his rogue ways, becoming the leader of a gang in the province. He became friends with other infamous characters in the area, such as Suea Kong, Suea Wang, Seau Beng and Suea Chuay. He met his wife while in the gang, and they had 5 sons and 3 daughters.

He left his old life behind after a few years and moved to Changwat Prachinburi with his family, working odd jobs to survive. Time passed, and his children grew up, transitioning to their own careers and families. He felt unfulfilled with his life, and decided to become a monk again in B.E. 2524 at Wat PraTum Sararam, Tambon Lad Takien, Changwat Prachinburi

. The Phra Upacha was Zhao Athigarn Charoen KittiSoPano. He went on a tudong journey to Changwat Pattaniand was impressed by the Buddhist culture there. He even travelled to the Cambodian border in pursuit of Buddhist knowledge.

It was during this period, that he met Phra Ajarn Plong Asokoh

There, he met Luang Phor Dam

, Wat Tah Thong, and became his disciple. Luang Phor Dam gave him a Tamra PhraWej, and bestowed upon him the knowledge of the wicha Long Akara

, an area bristling with landmines, that Luang Phor miraculously sidestepped with his supernatural prowess. The soldiers who witnessed this were amazed by his abilities and asked for protective charms that they could carry while on duty.

, Changwat Prachinburi. In B.E. 2530, he returned to Changwat Buriram, and the villagers in Tambon Sawai Jik, Ampur Muang, Changwat Buriram, requested that he build a temple there. That temple was Wat Thep NoraSingh. The temple was built on the site of a former cemetary and occupied 4.7 acres of land at the start. There was a building for meditation, as well as monk’s residences. There was also a Sala Garn Prian, and Ubosot.

Luang Phor was known for his adeptness with healing herbs. One of his sons developed a mental ailment, and Luang Phor was able to cure him using nothing but herbs. Words spread about this and people came to Luang Phor to seek treatment from their illnesses and ailments. Many felt indebted to him after he healed them, and stayed on as his disciples and students. The temple created the first batch of amulets in 17th March, B.E. 2551 to raise funds for a new Sala, as well as to purchase an additional 3.9 acres of land. Luang Phor Rom is renowned as one of the most outstanding disciples of Luang Pu Puang. He was born on 20th April B.E. 2509 at Barn Sarapee

, Tambon Sakae Sam, Ampur Muang, Changwat Buriram. His family name is Auamram. His father was named Lan, and his mother’s name is Aeung. They were a family of farmers who supplemented their income with odd jobs.
See Also
Latest Upload

He was ordained in B.E. 2528, and Phra Kru Tham Prapakorn

was his Announcing Teacher (Phra GammWahJahJarn), Phra Kru Sangkarakbanjong was his Preceptor, Phra Ajarn Pranorm was his Ordination Teacher. By B.E. 2561, he had completed 33 Pansa.

Luang Phor Rom had a profound love for learning and completed NakTam Aek as well as attaining a Bachelor of Arts (Buddhist Studies) degree. He also studied Tamra, wicha and Katha. He got heard about the fame and virtues of Luang Pu Puang, he sought him out, seeking his tutelage. Luang Pu Puang could see that Luang Phor Rom was a diligent pupil and decided to pass down all his skills and knowledge to him, and handed down the position of Abbot of Wat ThepNoraSingh to him.

As Luang Pu Puang is advancing in age, Luang Phor Rom has taken over all the administration and operations of the temple, as well as attending to the needs of the devotees who arrived at the temple seeking help. Some of them suffer from Khunsai MonDum, something LP is skilled at purging, more often than not, managing to return them to their normal selves.

He was the disciple of Luang Pu Hong Prompanyo

(refer to our article on Luang Phor Hong) and Luang Pu Puang Thammasaro. He has a passion for learning on Tamra and wicha. He also loves Suadmon and regularly carries out Sadorkror for the devotees who arrive at his temple. He is an expert in preparing NamMon to wash away bad luck. 12 baht for Kah Kru is collected for Rod NamMon.

Services in the Temple

The services are available to people from all walks of life, to bring them benefit and happiness. It is beneficial for people who seek to turn their life around, to seek blessings to gain what they wished for, as well as to learn meditation, which will ultimately bring them peace of mind and understand the teachings of Buddhism.

May all devotees be happy and free from suffering!