or Phra Ajarn Num Chinwaro was born on a Friday , some time in August 1891 (no exact date could be found, as records-keeping of the day was nebulous at best, particularly in rural areas), at Ban Don Nood, Pan Tae sub-districts, Khuan Khanun District, Phatthalung Province, Thailand. He was the son of Mr. Kliang and Mrs. Eiad Kaewchan.

His mother passed away when he was a mere child. His father however, was a Kalawat Ajarn

; a master sorcerer. As a result, Luang Phor had received significant tutelage in the art of Wiccha from a young age. His father also brought him into the tutelage of 9.Phra Ajarn Thong Thao, at Wat Khao Aor, a renowned Wicha practitioner of the time.

When he was 20 years old, he was ordained at Wat Khao Aor temple. He studied the Buddhist Scriptures for 6 10.Pansa

, before disrobing and marrying Mrs. Phum. They had 4 children together.

In 1963, Luang Phor became seriously ill and nearly died. A consulting psychic made contact with the spirit of a monk of Wat Khao Aor (other sources claim that Luang Phor Num dreamed about Phra Ajarn Thong Thao) who said that the only way he could get well was to ordain as a monk. Luang Phor Num promised that if he got well, he would immediately dedicate the rest of his life to the Sangha and the Dhamma.

Miraculously, the clouds of his near-fatal brush with death cleared, and he was restored to the pink of health. He once again ordained at Wat Don Sala

on 5th July 1963, carrying on many meritorious activities for the community in the name of Buddhism, until he passed away on 25th October 1976, at the age of 85 years old.

On 8th September 1977, he received a Royal Cremation Ceremony, presided over by King Rama 9. A fitting show of status, for a master many considered to have been an Arahant.

Luang Phor Num was schooled in Wicha by his father, himself a student of Wat Khao Aor, just like Phra Ajarn Thong Thao. His father however, considered himself a layman, and did not personally craft amulets, choosing to instead simply participate in the consecration processes. His father’s marriage, and his commitments to family life, ensured that he never crossed the rubicon into amulet-making.

The loss of his mother devastated his father, and he was never the same. Unable to further his son’s education in the mystical arts, he sent him to study under the tutelage of Phra Ajarn Thong Thao at Wat Khao Aor, knowing that only he could bring Luang Phor Num’s Wicha education to the next level.

Forseeing a bright future ahead of the young man who would surely grow into famous and honorable person, and worthy successor of his Wicha, Phra Ajarn Thong Thao agreed to teach him.

The group who learned Wat Khao Aor’s Wicha
(middle row, the second person from the right side is Luang Phor Num when he was a Kalawat and to the left side of him is Ajarn Khun Phan)

He came to absorb a comprehensive swathe of all the Wicha of Wat Khao Aor temple. He received direct, firsthand knowledge from the sacred scrolls, and renowned teachers of Wat Khao Aor temple. After Phra Ajarn Thong Thao passed away, he was chosen to inherit his Wicha lineage, and tasked with preserving and transmitting the sacred knowledge through successive generations.

The Amulet of Luang Phor Num

Luang Phor Num created a number of amulets, both on his own, as well as in collaboration with others, such as in B.E.2483, where he worked with Phra Kru Sitthiyaphirat (Eiat Pathumsaro)

of Wat Don Sala to craft Phra Maha Wan Dam-Khao and Phra Maha Yant for soldiers headed to the frontlines of the the Indochina War. 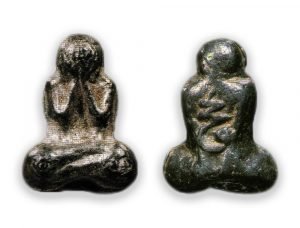 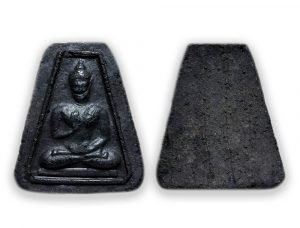 of Phra Nur Phong Phasom Wan (sacred powder consecrated with herbs), and in B.E. 2513 his creation of Phra Pidta Nur Chin Takau. In B.E. 2519, he was also tasked with consecrating Rian Roop Muaen Luang Phor Num and Phra Kring Taksin Chinwaro, that has been commissioned by His Royal Highness Prince Bhanubandhu Yugala himself. These were the last amulets Luang Phor Num were known to have Pluksek. He also created some Takrut and Phayant. These sacred objects are cherished by collectors and devotees alike, for their spiritual prowess and renown. LP Num was said to have immense mental powers. His Pluksek process was said to bear witness to many instances of seeming telekinesis, with inanimate objects being moved great distances merely by the powers of his mind. These intense psychic powers were said to have stemmed from the training he had received since birth.